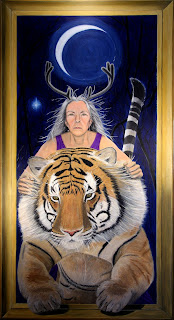 I enjoy symbolism in art.  This piece has a bit of symbolism.  Riding the Tiger is a metaphor for a number of different experiences like facing fear, bipolarity and drug addiction. However, the term  originated as a  Chinese idiom about Wen Jiao from the Book of Jin, which is an official text covering the history of the Jin Dynasty from A.D. 260 to 420. Wen Jiao, a renowned politician at the time, visited General Tao who was in the midst of quelling a rebellion and said to him, “In light of the current situation, there is no other way out. It is like riding on the back of a tiger and you cannot get off. The only way off is to kill it.” Wen Jiao eventually convinced General Tao to remain with the alliance. The allied armies stabilized and finally defeated the rebel army. Later on, the saying “騎虎難下,” “riding on the back of a tiger and not being able to get off” has come to mean facing a dilemma or being stuck in a difficult position with no way out but to see it through to the end.  Thus following the principle, the tiger cannot leap on the person riding it and it is only when the tiger tires itself out that the rider can dismount.
Other symbols are the waning moon representing the crone aspect of the earth goddess, the planet Venus representing the female, and lastly, the winter trees at night  representing 'the dark night of the soul', a time of perceived meaninglessness in life. The figure is riding the tiger right out of that reality.